Knowing how busy this time of year can be and how quickly dates can fill up, back in November I’d earmarked several dates in my diary which I wanted to keep clear for potential days out or activities together. Carefully devised to avoid the mid-December course of steroids and allow Poppy some quiet time in between busy days, on paper it looked perfect.

Our intentions started in the best possible way with a trip to Blenheim Palace to visit the festively-decorated house, which had been themed around the fairy tale of Cinderella. It was so beautifully presented and thought out, and it was such a delight to see the girls exclaim in joy as they explored the tiny details of each room in turn. The final room, laid out as the ballroom where Cinderella leaves her glass slipper, was our favourite. So taken by the music, our fearless Daisy twirled so hard she fell over with a bump more than once, causing other visitors to exclaim and marvel in equal measure at her ability to brush herself off and keep dancing. Poppy giggled in my arms as we waltzed nearby whilst admiring the decorations as the sound of clocks striking midnight and Cinderella running down the palace steps rang out around us. It really felt like we were in the story ourselves, and it was a wonderful feeling to be so present and immersed in our surroundings. We rounded off the day with a ride on the carousel, a look around the Christmas market stalls and a good root through the dressing up rails laid out in the stables. In fact, the girls loved the dressing up so much, we went back again later by which time they had tried on every item in or near their size! It was such a lovely day full of Christmas cheer and magic and was the first time this year I really felt that warm, Christmassy feeling.

The rest of December has passed quickly in a haze of craft activities and Christmas parties. As it happened, most of the other dates I’d set aside for days out to various places didn’t work out in the end but it didn’t matter. We’ve really enjoyed the festive season this year. It sounds pessimistic to keep expectations low, but I think when you’re not really sure if you’ll even make it to the party, let alone have a good time there, it means our lives are lived as one constant surprise! We rarely tell the girls what we’re doing ahead of time, so if there’s any disappointment in not doing anything it would be shouldered by us not them. Having said that, we’ve had just as much fun at home on those days we had days out in mind, so there’s not been any disappointment in that sense in a long while.

We haven’t even managed some of the the usual pre-Christmas essentials like making mince pies – I’ve had the ingredients waiting but not been able to find the right moment. Poppy loves to cook, but tiredness this month has meant lots of resting in the pockets of time when we might usually be more active. As I said earlier though, it really hasn’t mattered. I genuinely feel no disappointment at anything we haven’t managed and have just thoroughly enjoyed everything we have done. Poppy’s diagnosis really does help us see the positives in most situations and appreciate all the little things (which are really the big things in disguise!)

In previous years, I’ve definitely been more aware of the stresses this time of year can sometimes bring. Working so many Christmases in retail for a start. It instantly makes the season more commercial and you often see the worst of people rather than the best! It’s all over in a flash too. Since leaving, I’ve had pangs of missing it in some ways – there were of course many fun parts amongst the people with no sense of perspective shouting at staff – but overall, I’ve had a better chance to take the season slowly and enjoy the build up without being so exhausted by work.

This year, I’ve felt no Christmas stress at all. No sleepless nights working out what to buy people or what needs to be done. I’ve still been busy and kept lists of things to do, but have ticked them off gently without feeling too much pressure to get everything done. Presents have been kept small and simple, many homemade and personal. We’ve given money to CLIC Sargent and a few other charities in lieu of exchanging gifts with several people. I know for sure that there are people out there who will benefit from those donations much more than anything we could give or receive at this time.

Poppy and Daisy have both received so much already this year. The love we’ve all been shown is astounding, and when we all think back across the year, the stand out moments have all been wrapped up in time spent together, doing things we love. There’s not a single gift which comes to mind, though there have been many so generously given. That’s not to say the gifts haven’t been appreciated, and particularly the many craft activities, colouring and sticker books which have filled waiting times at the hospital have been so helpful. But again, by that point, they become more about the time spent together, doing things we love rather than the gift itself. The books, read with love and the lights which brighten our hospital room and remind us that we are surrounded by people thinking of us and wishing us well. Not to mention the many meals cooked for us, which have been a comforting relief to return to after hospital or have made it possible for us to enjoy time as a family without worrying about going to the shops or cooking dinner. Gifts of love and time have been the most appreciated gifts of all.

So there won’t be mountains of presents under our tree. In fact, Poppy and Daisy will both be receiving one small gift each from us – a new magic colouring book and a homemade photo album each. Poppy’s is full of photos from our trip to Center Parcs which she loved so much and Daisy’s is filled with photos of them both across the year. It wasn’t easy to trawl through some of the photographs and I spent a quiet afternoon alone sobbing my way through my camera roll but in the end, it’s a beautiful album and it reminds me of how much good has come from this year amongst the tricky bits.

It’s funny but talking to people around us, I get the feeling from some that they are expecting us to celebrate Christmas in a big way this year. But what do they mean by a big Christmas? If they mean, extravagant then no, not at all. But if they mean, full of Christmas cheer and the pleasure of each other’s company, then absolutely! Poppy’s favourite part will inevitably be the food, as it so often is.

I’ve enjoyed the build up, but as I write this on Christmas Eve, I’m reminded that Christmas Day is just another day. Living each day as it comes takes away some of the pressure and anticipation of events for us, as I explained earlier that expectations are quite low. We don’t know what will happen each day or how well Poppy will be feeling. So whilst I’m looking forward to Christmas Day as I always do, it’s not the be all and end all if things don’t go to plan and it really does feel like simply another day. Another day with air in our lungs and time on this planet, and for that I am so thankful. I guess that sums up our year actually – despite everything that has happened, I remain so grateful and thankful that we are all still here together. It could be so much worse, and for many it is. So however you’re spending Christmas time this year, my hope is that you’ll all be happy, spending time doing things you love. Because when I look back, those are definitely the bits I’ll remember.

A new year post will reflect on our year I’m sure, but for now, thank you for all of your well wishes and here’s wishing you all a merry Christmas in return x

View all posts by sweetpmum

2 thoughts on “So here it is…Merry Christmas!”

If you've been inspired by Poppy's story to give blood please tell us.
We'd love to know. If you haven't already done so, it's easy to register or book an appointment now!
25 heroes so far... 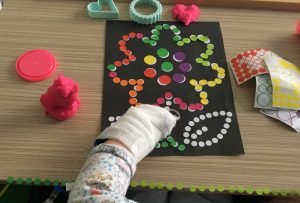 Read HelloSweetP from the beginning...